Every year at the 11th hour of the eleventh day of the eleventh month, we stand outside in the cold, crisp air to pay tribute, and to remember the men of this village who fell in the Great War, and every year as I listen to the names being read out I wonder about the men behind those names. So this year being the 100 years anniversary, seemed like an opportune moment to find out just who they were.

The first thing I found was that not only do we have two sets of memorials in St Andrew, one behind the altar emblazoned in gold, and one written in stone on the memorial, but we also have a third set in the Memorial Hall (which was built incidentally to commemorate the fallen of both wars), AND one in each of our two schools. And surprise surprise they don't match! My list of the fallen has steadily grown and to date I currently have 50 plus names and hopefully this will prove correct unless you can tell me any different!

The ages of the men range from 18 to early 30's, some married but most single. Not all the men were Ombersley born and most were farm workers of one sort or another, but they all had Parish connections. Like Frank Bellamy who was a private in the Worcestershire Regiment, born at Powick, enlisted at Kidderminster and was a farm labourer at Comhampton, later to be killed at Ypres aged 34 years. Remembered with honour on the Menin Gate where they still honour the men at a nightly service there. Frank must have died during the 3rd battle for Ypres before the capture of Passchendaele which was in November 1917, 4 months after he died.

Young Percy Biddle, the son of Henry and Ann worked at Ombersley Court and was 19 yrs. old when he died in France.

We have brothers Albert and Joseph Butler of Mortimer Terrace, aged 18 and 28 respectively when they died. Joe is buried in St Andrew's churchyard, you can find him just by the big fir tree in the middle of the churchyard if you want to pay your respects. Albert was a corporal at 18 and is buried on the Island of Malta.

James Wainwright Blount was aged just 19 when he died of wounds at sea. His parents lived at Chadwick. His death confused me as he died at sea yet was a corporal in the 4th battalion of the Worcestershire Regiment, so what was he doing on a ship?

An example of a soldier who wasn't local but had local connections, was John William Hincksman who emigrated to Canada and became a rancher there. He became an Infantryman one of the Canadian Expeditionary Forces. He is described on De Ruvigny's Roll of Honour as the most promising officer who was due for immediate promotion for all the good works he had done for his unit. He was, it says, a thoroughly efficient, courageous, reliable officer of a most pleasant character. His mother lived at Sinton. Mrs Hincksman had 3 sons on active service.

Henry Sheppard lived at Sarah House, Boreley and was dad to 4 young children when he was killed aged 29, and I am pleased to say that I have a picture of Henry resplendent in his bowler hat with a magnificent moustache!

Lastly Aubrey Herbert Bower Webster was the only son of John Webster, the Vicar of this church. Killed in April 1916 Aubrey was 27 yrs old and a schoolmaster at a boys boarding school in Tonbridge, Kent. When he died, Aubrey left a will containing £215 7s 7d . There is a memorial to Aubrey behind the choir stalls.

I hope I have given you just a small insight into the lives of some of these brave, ordinary men. Please take some time to think of them on this anniversary of what is the worst loss of life in conflict ever; after all they did give their tomorrow so you could be here today. November 11th 2018 was the 100th Anniversary of the Great War and for every month we feature the names of the Tommies who gave their tomorrow for your today.

I would love to hear from anyone who has further information or photographs about any of the men named.

Jeanette Horn This email address is being protected from spambots. You need JavaScript enabled to view it. 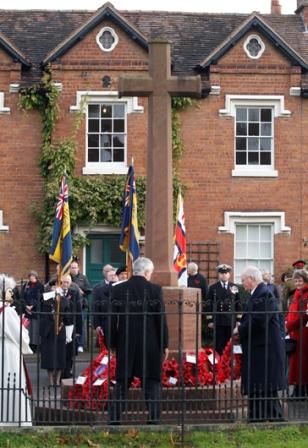