The Bells of St. Andrew's Church

St Andrew's bells were cast in 1682 by Henry and Matthew Bagley.

High in the tower of Ombersley Church are six historic bells. Three of the bells are those originally cast over 330 years ago in 1682. The remaining three were recast from the originals in 1828. The lightest of the six, No.1 (the treble), weighs just over 6 cwt. and the heaviest, No.6 (the tenor bell), just over 16cwts.

In 1682 a pair of itinerant bell founders called Henry and Matthew Bagley cast a ring of six bells for the former Ombersley Church of St. Ambrose (next to the present Church, the remains of which is now the Sandys family mausoleum). Although they are described as "itinerant", they were not a couple of jobbing handymen just passing through and who were here today and gone tomorrow. They were skilled and experienced craftsmen well known for their high standards of workmanship. They came from a small rural village in Northamptonshire called Chacombe, but such was their reputation that they cast bells for churches right across central England.

Henry and Matthew were the sons of Henry Bagley senior born in Chacombe, Northamptonshire in 1608. He was a well established and prolific maker until his death in 1684, although the period of the Civil War interrupted his activities. In 1674 he took into partnership his eldest son Henry junior. In that year the six bells at St Michael's, Coventry (which later became Coventry Cathedral) were recast into a ring of eight by ''Henry Bagley sen. and Henry Bagley jun.'' In about 1679 Henry senior became less active and Henry junior then went into partnership with his younger brother Matthew. It was this partnership which cast the bells at Ombersley.

The first and fourth bells were inscribed "Henry Bagley Made Mee". It is very unlikely that this would have been Henry senior, but was his son Henry junior. Henry Senior would have been 74 years of age in 1682 and in fact died on New Year's Day just over 12 months later. The second and third bells were inscribed '' Matthew Bagley Made Mee''. There is no record of either Henry junior's or Matthew's birth although it is certain they were both born in Chacombe. It is known that the two brothers worked together between 1680 and 1687 and in the same year as Ombersley bells were made they cast a ring of six bells for the church at Ringstead near Kettering with virtually identical inscriptions apart from the fifth bell in each case which carried the names of the churchwardens.

In c1687 they went their separate ways and in 1688 Henry went on to cast a ring of ten new bells for Lichfield Cathedral - the first complete ring of ten ever cast and a prestigious project that must have taken him the greater part of that year. He died a wealthy man fifteen years later on 1st April 1703 at Ecton a small village four miles east of Northampton and where he had leased the manor and set up a foundry in c.1689 which lasted until his death. In 1686 Henry was elected as a member of the 'College Youths', a London ringing society which today, as then, forms the elite of the ringing world.

By 1687 Matthew had set up a foundry at Evesham and in 1688 made the bells for Studley Church which were inscribed "Matthew Bagley Evesham". However his time at Evesham was short lived and he died there unexpectedly on 11th June 1690. He was buried in the North Isle of St. Lawrence's Church, Evesham the following day. Matthew died intestate and the administration of his estate was granted to his brothers Henry and William, his sisters Hester, Mary, Sarah and his mother Mary Bagley.

Towards the end of his working life Henry senior took as an apprentice another Matthew Bagley. This Matthew was born at Chacombe in April 1653 and was the son of Henry senior's younger brother, John Bagley. It is my belief that this Matthew continued at the Chacombe foundry until his move to London in c1689 when Henry junior moved to Ecton and Henry senior's third son William took over the Chacombe business.

By 1690 the second Matthew had taken the lease of an existing foundry in Windmill Hill, London concentrating mainly on casting ordnance for the Government rather than church bells, although a few of his bells from the early 1700's are known. The following is an extract from a press report which appeared in the 'Flying Post' on 12th May 1716:-

"Last Thursday night about 9 aclock a tragical accident happened at the Royal Foundry near Upper Moorfields while workmen were casting a Canon the metal that was running into the mould flew up on a sudden with very great noise and violence and came down like Drops of Fire not only upon the workmen but Spectators (of whom there were a great number to see the performance). Several attended from the Tower particularly Mr. Hall Clerk of the Ordinance who was so sorely wounded that he dy'd the next morning. Bagley the master founder and his son with about 20 others were very much hurt. Tis generally agreed that this sad accident was owing to the dampness of the mould."

Both Matthew and his son (also named Matthew) died a few days later and the parish register of St. Giles, Cripplegate records:-

The tragedy led to the founding of the Royal Arsenal Brass Foundry a year later in 1717 when The Board of Ordnance decided to build its own foundry at Woolwich.

The question remains where were the Ombersley bells made? Were they cast at Chacombe and hauled by cart all that distance on the rutted tracks of the day or were they cast on site? It is known for certain that in 1678 Henry (senior or junior is not recorded) cast bells for Ebrington, near Chipping Campden, using a casting pit in the churchyard and there are a number of churches where the field next to the church is known as the 'bell field' for that very reason. It is more than probable that the Ombersley bells were cast close to the old church and it is not inconceivable that the bells may well have been cast in the adjoining field which became the site of the new church of St. Andrew's.

The Bagley bells remained in the old church of St. Ambrose until 1828 when they were taken down from the then unsafe tower (the spire had already been removed in 1816) and shipped via the River Severn to John Rudhall's foundry at Gloucester where three of the bells were recast (Nos. 2, 4 and 6). He was also commissioned to retune the remaining three Bagley bells to produce "a musical Peal of Six". At a Vestry Meeting of the Trustees in June 1828 attended by John Rudhall it was agreed that he " would within 3 months from the time the old bells are delivered at Holt Fleet, perfect the whole of the work, and hang the six Bells in the Belfry ready for use. But the Trustees are to find Ropes for ringing them, and to carry the old Bells from Holt Fleet and when Recast to carry the three New ones and the three perfect ones to the Church, and find assistance for raising the whole six Bells up into the Belfry, and he Mr. J. Rudhall engages that the Oak timber to be found by the Trustees shall be carefully worked up into the Frames with as little waste as may be". And the cost of all this work, John Rudhall's bill came to £130-19-2d.

In December 1928, The Berrow's Journal reported that on Friday 12th December 1828, "A peal of six bells was opened by the Society of Worcester Change Ringers with a peal of Kent Treble-Bob. Three of the bells, viz. 2, 4, 6, were new cast by Mr. Rudhall bell-founder of Gloucester in a masterly manner. The other 3 belonged to the old church: they are now as complete a peal as any in the county." In 1935 the bell frame was reinforced with steel joists and in 1936 John Taylor & Son of Loughborough (now one of only two remaining bell founders in the country) retuned the bells to the Key E and they were rehung with new bearings.

It is a testament to the workmanship of Henry and Matthew that three of their bells are still with us today well over 300 years after they were cast and there is no good reason why they should not be heard for a further 300 years in the best traditions of ringing the bells of Ombersley Church. 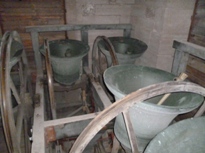