Reproduced from the August 2020 Parish Magazine

As everyone in Ombersley knows, and as Robert Thornton’s article in the July edition describes, the “handsome” new church built at no small expense to the village and to the then Lady Sandys, the Dowager Marchioness of Downshire (or ‘the little marchioness’ as she was known) was a triumph for the architect Thomas Rickman, but suffered in the ensuing 170 years from the effects of wind and weather. It is a fine example of Georgian gothic revival. The stone used had been appropriately local, but was relatively soft and so weathers more than many do. And the stone blocks which form the outside layer of the walls were laid on their edges so as to keep the expense within bounds, and were in many places locked to their neighbours by iron cramps encased in lead. The iron cramps were fine for a century or two, but where the weather got in, gradually they have rusted and “blown”, causing bits of the stone to separate and fall off. By 1990 the building stood, despite its II* listing, in need of serious renovation. We might or might not have opted to start with so large and architecturally interesting a building, but no one can choose their inheritance. OSCA (Ombersley Spire and Church Appeal) was formed as a separate charity in that year to tackle the job. Under the successive chairmanship of Douglas Garrad of Hawford Lodge and Mike Griffiths of Blossom Farm, it achieved by 2012 four stages of very extensive rescue. The spire was made safe. The roof was completely replaced. The nave windows were rebuilt. The stonework of the tower was made safe. All this cost in round figures £750,000 over 25 years. Parishioners contributed regular sums by different routes, from covenants and legacies to sweatshirts via golf days, and more was the product of generous grants, hunted down chiefly by Dieter Baer.

The windows in the church are of a very rare and interesting design. Instead of conventional leaded stained glass, they are formed of very fine panes of coloured glass mounted in a (then) new bi-metallic Tshaped structure of glazing bars. Many of us don’t look at them as much as we might, but they are remarkable for their combination of deep colour, clear lights and stone tracery if you take a moment to wonder, preferably with the sun behind them. The big East window behind the altar has unique representations of putti (cherubs) in the top and the Sandys arms about half way up. Glazier experts are sufficiently interested in the windows to want to write up their artistic history when they are available in the contractors’ workshop to be inspected closely. Sadly, the glazing bars have buckled, several of the panes have sprung out and been lost, and some of the stone tracery has weathered badly. It is nearly 20 years since the congregation at a schools’ service was rained upon from leaks in the upper clerestory windows and had to be issued with umbrellas. The unreplaced windows have mostly been covered on the outside by unsightly polycarbonate screens as a ‘temporary’ measure ever since. The screens allow the church to be used, but they do not prevent further decay, and they cut down the light. The remaining stage of the rescue renovation is to rebuild the remaining 14 windows and make the church safe to use for the next 200 years, as it has been for the last 200.

This is a major work. We are fortunate to have the help of Holy Well Glass, of Wells, to undertake it. They have previously worked on Worcester Cathedral glass and have done one of our nave windows. They will need to take out each window seriatim, remove it to their workshops to be rebuilt, and then replace it as it was originally. The cost is around £305,000, net of VAT, and the work will take us well into 2022. At least until March 2021, and it may be thereafter, the Government has a scheme under which listed churches and other places of worship can reclaim the VAT. Some applications for grant support are still in train, but we have cause already to be extremely grateful to the Ombersley Conservation Trust, to the Sandys family Charitable Trust, to the Richardson Trust and to the late Godfrey Sanders, for major contributions on top of our own savings and fundraising. Together, these efforts have raised so far enough for OSCA to be in a position to enable the PCC to commission this final stage of making the church wind- and weather-tight so that it can remain secure for use for all the many different kinds of event which take place there. It is important not to delay so that as much as possible of the work can be done in the life of the VAT recovery scheme, in case it is not renewed, as we hope it will be. The success of the work will continue to depend on the support of parishioners, but we are close enough to get a good deal of it done, and we hope to begin in July. When it is completed, we can then move on to the other things which the church needs to continue as the spiritual centre of the village, confident of a wind- and weather-tight, as well as an architecturally special, frame.

We shall have to get used to the consequences of work in progress. The specialist glaziers will not have to be on site anything like all the time. But while each window is worked on, its space will have to be boarded up. The ground floor windows can be dealt with mostly from the outside, but the clerestory windows, when we get to them, cannot be done without scaffolding inside the church. We hope that one of the spin-offs will be the opportunity to watch some high-class specialist craftsmen at work, and maybe to see some demonstrations of their unusual skills. 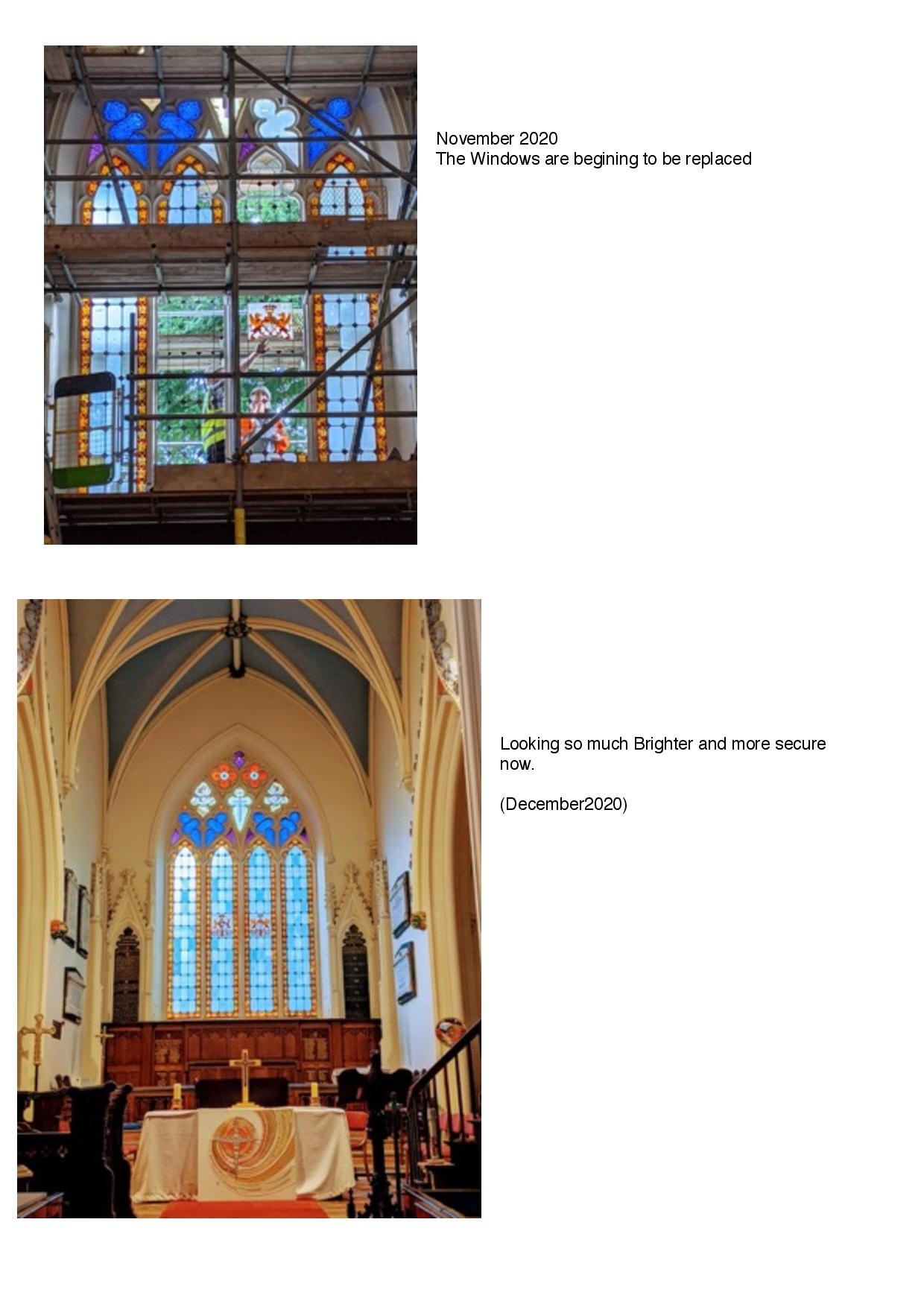 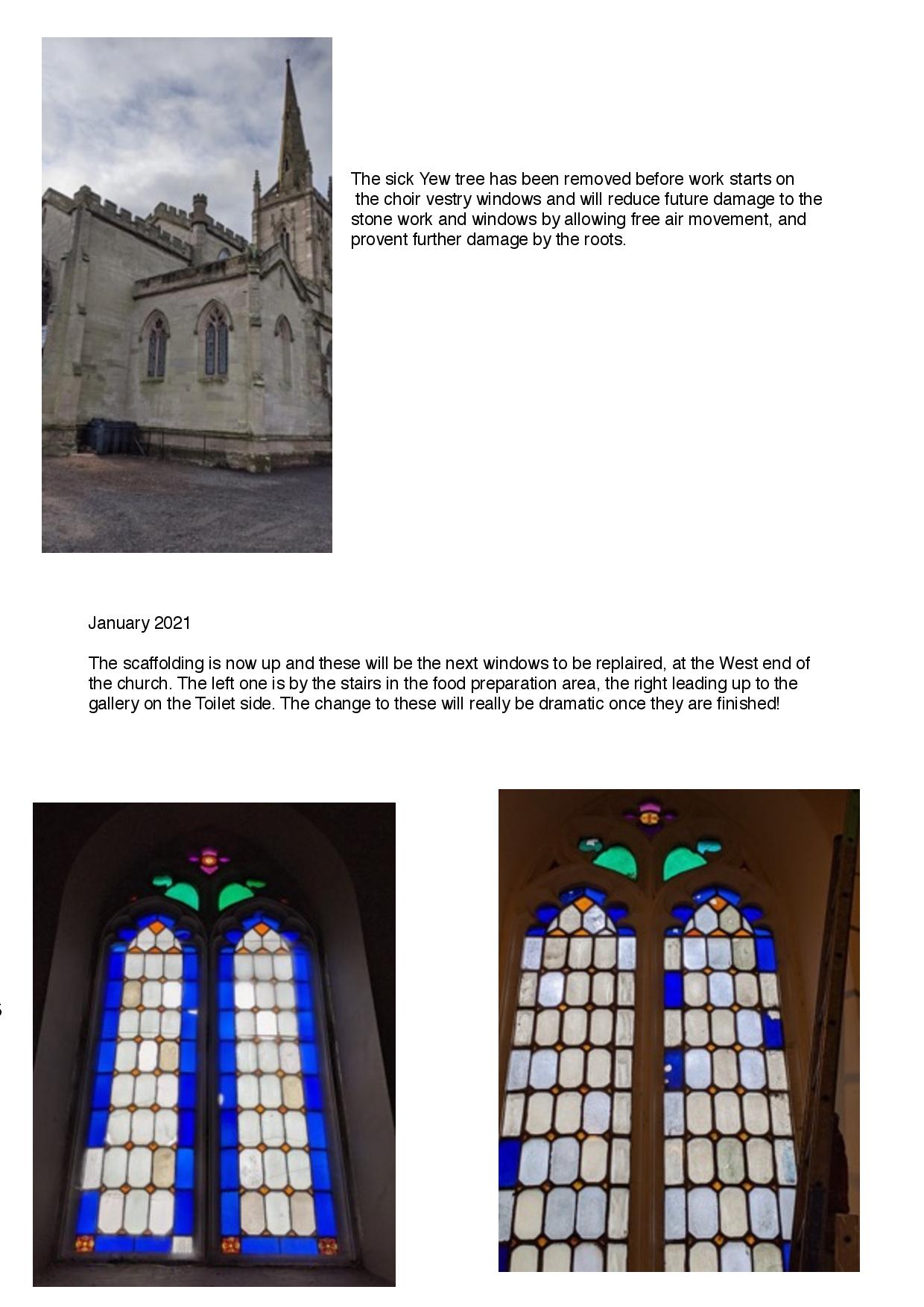 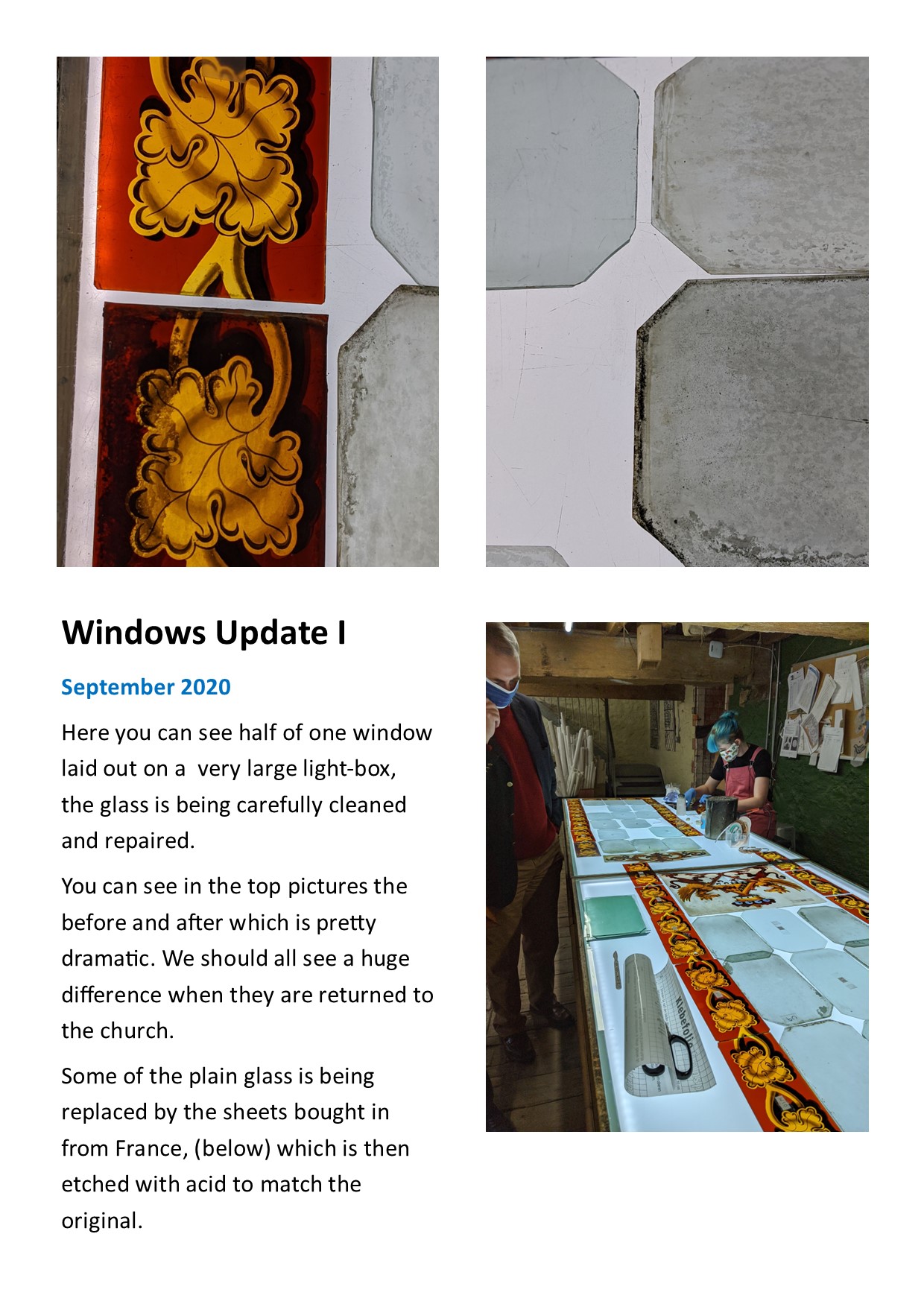 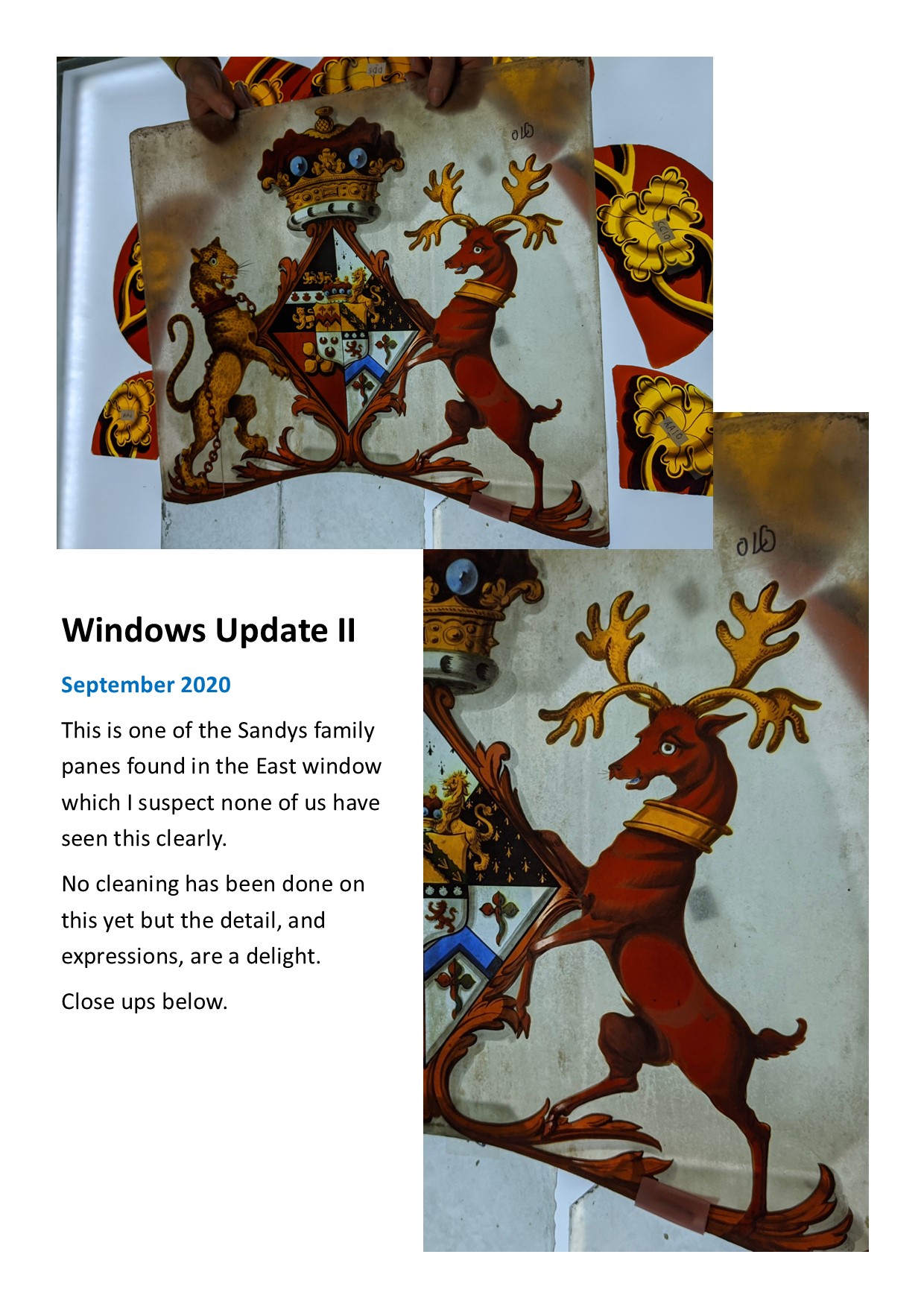 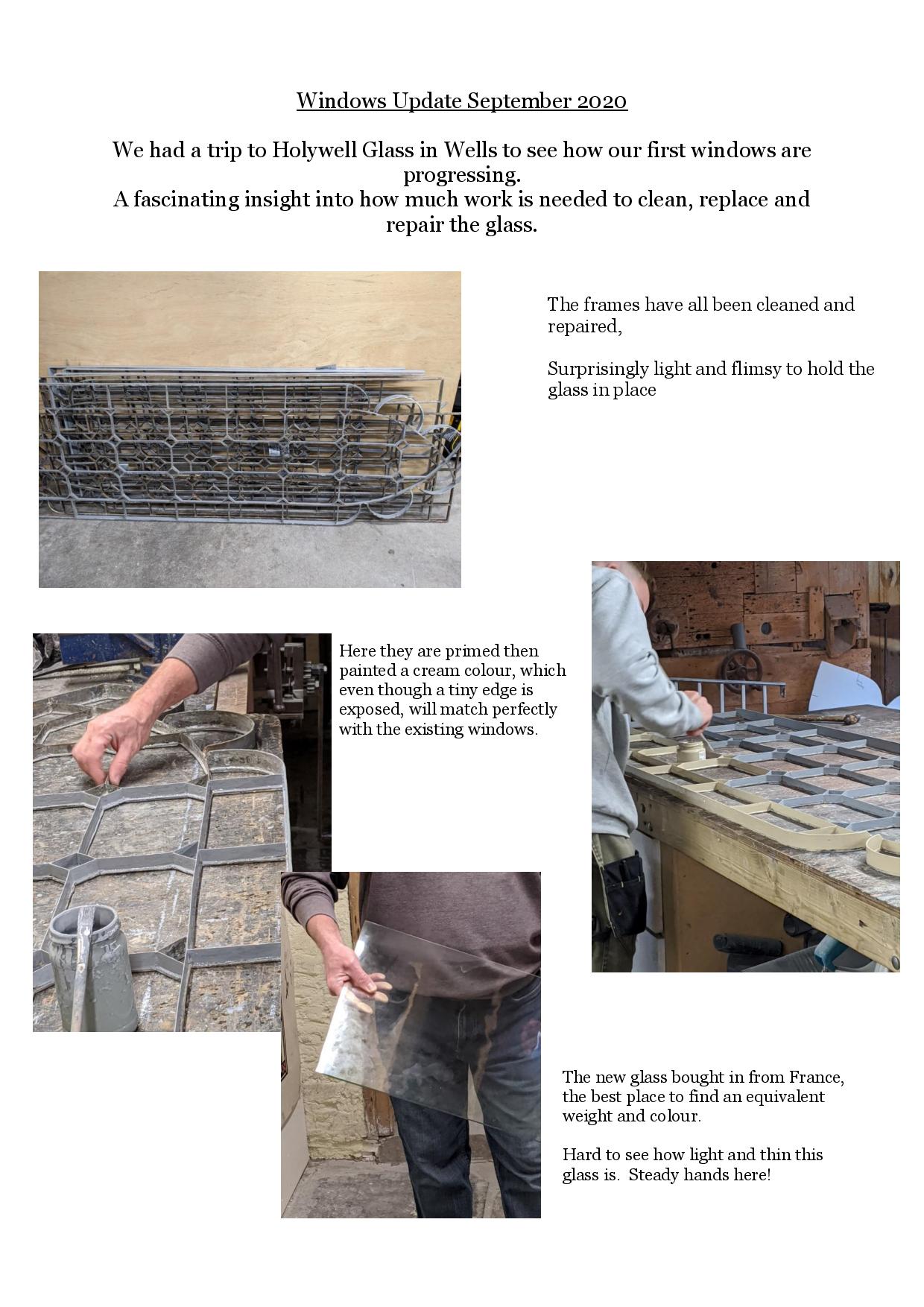 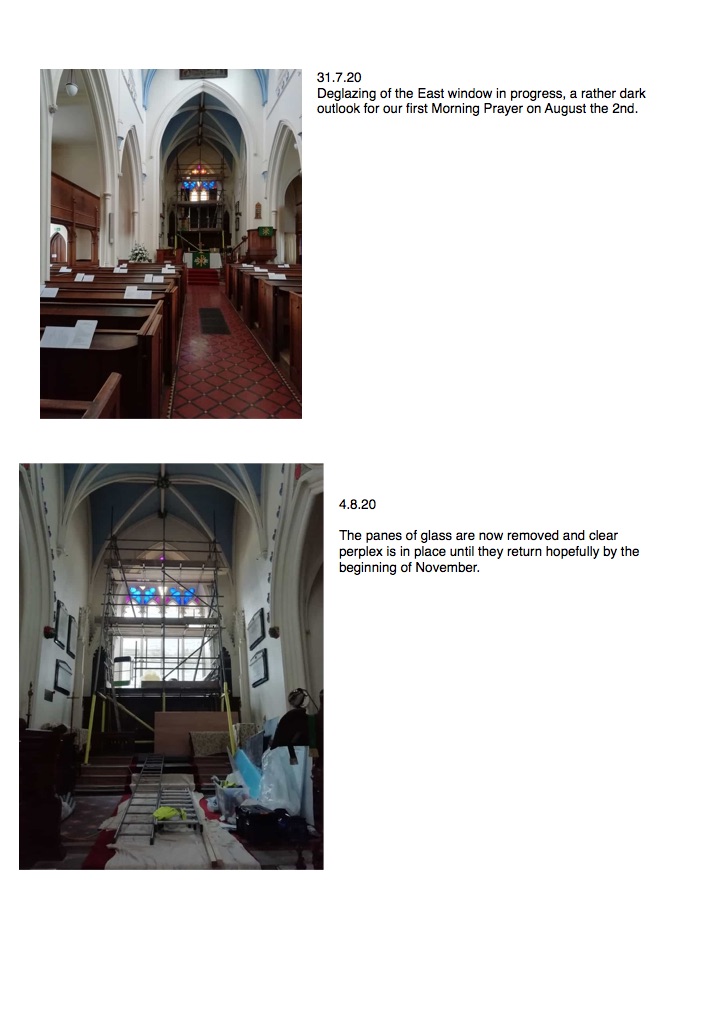 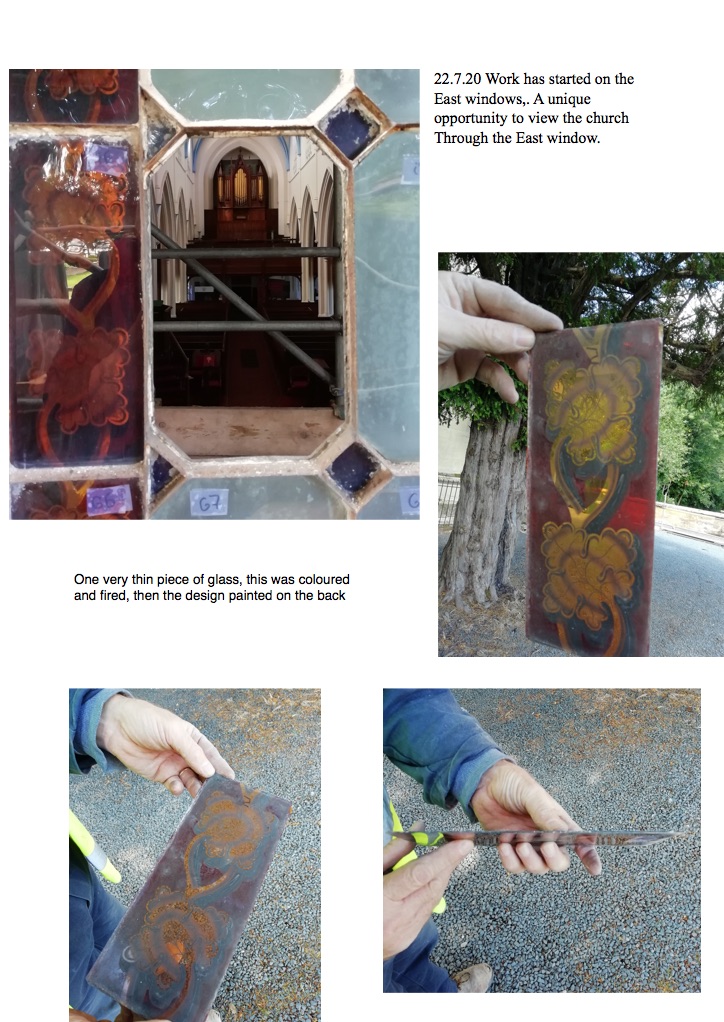