There is a prayer of St Theresa - of Attila that is, not the Home Secretary:

Behind the gold plated pipes which form the frontpiece of the Gray organ lies an area about the size of a small sitting room, probably about 12 feet square. This houses the organ.

For every note and every stop there is a pipe, and for some stops two or even three pipes. There are well over 1000 pipes lurking behind the front of the organ which you see. Think of these pipes as the people who make up the Church.

Perhaps think of an organ pipe like a penny whistle.

The standard pipe is eight feet long. This gives a note which is the same pitch as would sound on a piano.

The pipes which play an octave lower than standard pitch are 16 feet in length. This is the equivalent of what often a pianist will do when accompanying singing, making an octave on the lowest note for the left hand. Then some organs have stops which play two octaves lower. We have two of these on the pedals of the electronic organ. They are the ones which make the windows of the Church rattle.

I think of the little pipes as being those essential people without whom the Church would not exist; those who want no more than to come along to Church to worship. Perhaps slightly bigger are those people who help to clean the Church, act as sides people, help with refreshments. Then I think of the big pipes as:

The Vicar
The churchwardens
The members of the PCC
The captain of the bellringers
All those whom you cross at your peril.
But the pipes are nothing without the wind going into them.

And I think of this wind as the influence of God, Father, Son and Holy Ghost. Theologians write about how difficult it is to speak on the Holy Trinity. But may I suggest it is really simple? It's like a set of cricket stumps. Looked at from the front, you see three. Looked at from the side you see one. But whichever way you look at the Trinity, it is absolutely crucial to the functioning machine.

In the old days before we had electricity, organs had to have the air provided manually by someone pumping a set of bellows. If you look at the old records of this Church you will see the in the nineteenth century the blower was paid at one tenth the rate of the organist. I have only ever played an organ which was manually blown. As a young man I was playing for a service when there was a power cut. Someone volunteered manually to provide the wind. It was only afterwards that I learnt that during the War he had been a prisoner of the Japanese. So there was I, totally unworthy, having the air provided by a gentleman who had been a Japanese slave. One coolie job exchanged for another.

Then we can turn to the organ working. We have the pipes. We have the power. When the pipes work together, the possibilities are formidable. One malfunctioning pipe, as when I manage to put my foot on the wrong piece of wood, and things can be dreadful.

But when they work together, when we work together, the sound is absolutely marvellous. In the words of President Obama - Yes we can. It's no accident that the organ is known as the king of instruments.

But each individual, whatever their role, is significant.

After giving the previous talk I went into the choir vestry, as I always try to do, to thank the choir for their great support, without which I could do nothing as organist. I was greeted with the comment that I had not mentioned couplers.

I mentioned this to a friend and was greeted with the question: "What is a coupler?"

So maybe I can speak briefly about couplers.

You will have noticed while waiting in the chancel to take communion, and distracted by my hitting a wrong note, that the digital organ which we presently use has three manuals. Sometimes you get more, sometimes less. The Gray organ here has just two manuals. The biggest organ I have ever played had five.

The central keyboard is called the great. The pipes to this are unenclosed. There is nothing the player can do to make a note play louder. It's not like a piano where you can make a note play louder by hitting it harder. You could hit the great organ keys with a sledgehammer and all you would get is the same level of sound that would be achieved by a two-year-old child.

Above the great is another keyboard called the swell. Traditionally the pipes for this would be enclosed on a box with a louvered front. Think of this rather like a venetian blind. The louvres can be opened by depressing a pedal by the organist's feet and the volume of sound will rise. Below the great is another keyboard known as the choir. This is designed to accompany a choir, as opposed to a full congregation, and contains very much more gentle pipes than great or indeed the swell. Again this would usually be enclosed in a louvered box, just like the swell.

Perhaps we might think of the couplers as being a metaphor for those people who really make things happen.

The construction of the Church in which you are now sitting was completed in 1829, the previous Church having apparently fallen down. A new organ was bought for the Church by the Marchioness of Downshire. The payment by the Marchioness is recorded in the Gray and Davidson account book as having been made on 22 June 1829. The organ cost £350 to which there was added a further payment of £35 for "setting up". Payment was made in cash. The new Church was consecrated on 25 June 1829. Berrows News records that the organ "was very well played upon the above occasion by Mr Vaughan, the organist appointed by Her Ladyship".

It seems probable that the organ in 1829 consisted of little more than the present great organ. There appears to have been some space left inside the organ case for the addition of a swell organ. There may have been a single octave of pull-down pedals permanently coupled to the great organ.

At this time the choir was located in the gallery. It is also highly probable that the organ would be supplemented by other musical instruments.

The Marquess and Marchioness of Downshire

When I was looking into matters for the proposed restoration of the Gray organ, I visited Down Cathedral. I was surprised to see how closely Ombersley Parish Church parallels Down Cathedral. Apparently the then Cathedral at Down had fallen into a state of decrepitude by the end of the eighteenth century, and the first Marquess of Downshire (Wills Hill) who was, I think, the father-in-law of the Marchioness to whom I refer above, had been instrumental in providing for its restoration. I understand that the organ had been donated by King George III at the instigation of the first Marquess. I believe that the Down Cathedral organ was built by Samuel Green and then enlarged by William Hull in 1818 which, having regard to the fact that the renovated Down Cathedral seems to have opened for business in 1818, would seem likely to have coincided with its re-opening.

I also went to Hillsborough. The organ there had been bought by the first Marquess. What a couple of players the Marquess and his daughter-in-law, the Marchioness, must have been. For two so closely related people to be instrumental in the provision of one organ is tremendous. For them to be involved with two is phenomenal. To be involved in three - well words do not exist to describe such an achievement. That organ, however, is a Snetzler, I think of Swiss origin.

The Ombersley organ was built by Thomas Gray in 1829. For all that the builders of the three "Downshire family organs" were different, I find it difficult to believe that there was not some "cross-pollination" from one organ to another. Moreover, I believe that Gray's workshop in Clerkenwell in London was very close to what was then the Marquess of Downshire's London home. I wonder if the Marchioness might have heard (or even played) the Down organ and then gone to Gray, described a stop or a combination of stops to him and had them replicated for Ombersley.

The Ombersley Church is something of a cross between Down Cathedral and Hillsborough Church. It has a spire which could be a replica of that at Hillsborough, while the body of the Church seems to be modelled on Down Cathedral. In terms of size there cannot be more than a few square yards between them. The organ cases look, if not like brothers, at least like uncle and nephew. The arches of both churches look as though they have come from the same mould. The ceiling bosses of each are almost identical. The window design and even the clerestory windows are also strikingly similar, with the exception that the incline of the sills are rather steeper at Ombersley than at Down. The altar backdrops are almost the same. The boxed pews of random lengths are similar, though in Ombersley they go across the Church rather than from back to front as a lot do at Down. (I understand, however, that a lot of the central pews have been removed from Down). The exterior picture in the current Guidebook of Down Cathedral taken over St Patrick's Memorial Stone could be mistaken at a quick glance for Ombersley Church.

I really cannot believe, having seen both Hillsborough and Down, that Rickman, the architect of Ombersley Church, did not model it on those Irish churches.

However, this in no way diminishes the work of the Marchioness as a coupler, a person instrumental in getting things done. She was the most significant person in the history of this church.

And so I finish again with St Theresa. 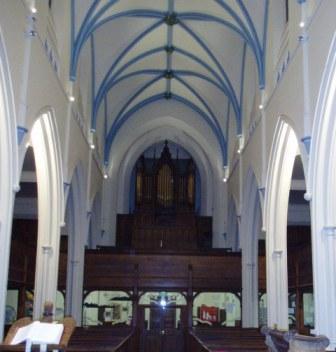