History of the Ombersley Hand-Bells

The hand-bells in Ombersley were made by Shaws of Bradford who were making bells from 1848 to 1910; so the Ombersley bells must, at the very least, be a hundred years old. Shaws was the largest Hand-bell Foundry in the world in the 1880s and made sets for many groups of players, even a set of 250 bells for a Dewsbury ringing group. (This makes the Ombersley set of 16 bells seem very small fry). It must have been a very popular pastime in the Victorian era !!!

Sid Duggan (who lived at Oldfield . he's related to the Gwynns and the Farleys, all well-known Ombersley names) was the Ringing Master of the Tower in the early 1900s. He gave the hand-bells to the bell-ringers and they stayed in the Tower for many years. We don't know exactly when this was but Basil Lamb started ringing at 14 years old (during 1946) and the hand-bells were kept in the belfry at that time. As far as we know they were not used much then, if at all.

Then, Colonel Robinson, who lived at Woodfield Cedars, borrowed the bells for his large family of children and they went around the village ringing Christmas carols. When Colonel Robinson died, and Mrs. Robinson came to live at Canada House, she returned the bells but there was one missing. In the early 1980s, one of the bell-ringers, John Huggins, paid for a new bell to be cast at the Whitechapel Bell Foundry at a cost of £300 - £400. This is why one is different from all the rest.

In his Will Sid Duggan left a bequest for the ringing room in the Church Tower to be panelled to keep it warmer, and a seat was put all round in the 1970s. Whilst the work was being carried out, David Mountford took the bells away and had them insured against theft on a 'new for old' basis @ £5000 - £6000 based on a valuation by the Whitechapel Bell Foundry.

The bells have now been brought back to the Church and Louise Robinson, no relation of Colonel Robinson, has got together a mixed band of beginners and more experienced ringers, all very enthusiastic and keen. They enjoy meeting once a week in order to practice their ringing for fun and to play at special occasions using arrangements composed by Louise. They have already played on several occasions in the church and the Memorial Hall.

Not having been used for a long time, the leather straps on the bells had become hard and brittle; one had actually broken through and at least three others were in danger of the same. In order to soften them Colt's Foot Oil was applied to them. With that and regular use the hand-bells have become easier to use.

Fortunately several of the bells have now had new straps made for them, and the Ringers occasionally run fundraising events to help cover these costs, and for any repairs that might be necessary in the future. It would be lovely to buy more bells but that's for the future.

The Ringers meet on TUESDAY afternoons at 2.30pm in the Narthex in the church If you are interested in joining please contact Louise Robinson on 01905-620995 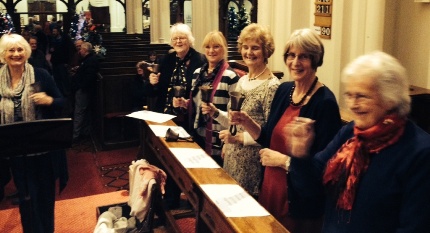